Remorse rate is a measure of people who quickly leave a new carrier because of network quality. Carriers aim for low remorse rates which mean fewer customers leave due to poor network performance. 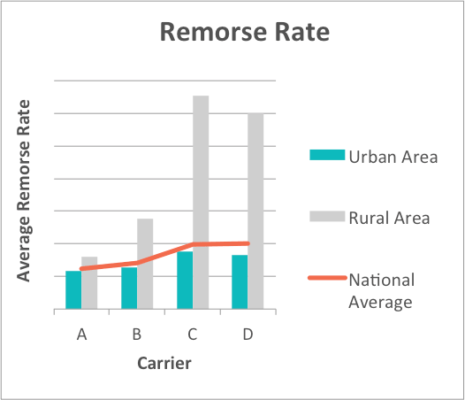 For demonstrative purposes, Exhibit 1 shows remorse rate for four carriers in two locations: an urban area versus a rural area. All four carriers have relatively low remorse rates in the urban area where network infrastructure is typically more substantial. In the rural area, however, Carriers A and B have lower remorse rates which indicates Carriers A and B have stronger network coverage than Carriers C and D. This data can help clients understand their infrastructure needs in addition to how well competitors are performing in certain markets. 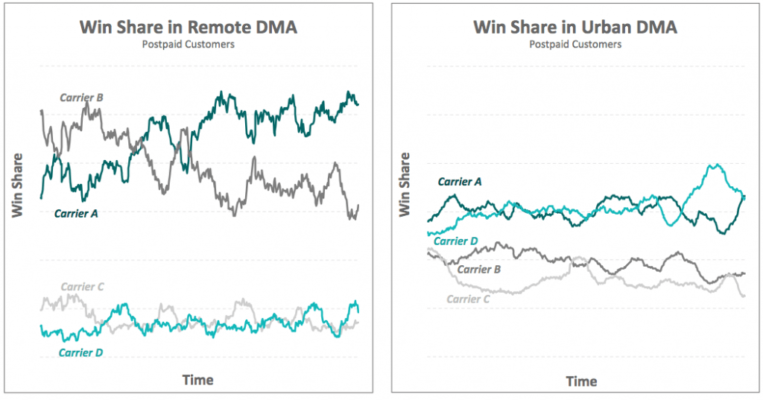 Exhibit 2 examines carrier win share in the rural market which exemplifies the conclusion from the remorse rate data: Carriers A and B maintain strong win share over C and D, which in this case, can be attributed to a lower remorse rate, and better network coverage. In the urban area, however, win share is more evenly distributed across the four carriers. With similar remorse rates among all four carriers in the urban area, it’s likely that network coverage is not as influential in purchasing behavior as it is in the rural area, thus customers in the urban areas may be more motivated by price and promotions.

Exhibit 3 demonstrates the impact remorse rate data can have on customer retention and acquisition. For example, this exhibit looks at the same urban area over the course of four years during the carrier’s 4G coverage expansion. Over time, as the new 4G coverage became available to larger portions of the population, remorse rate declined and this carrier was able to improve their competitive stance in this market.

Overall, this data can provoke strategic actions by answering a variety of questions: should Carrier A and/or B continue to invest in infrastructure in a specific area to gain more market share? Should C and D further invest in their networks to stimulate more competition? Have C and D recently invested in network infrastructure and need help rebranding their image in the area? What factors drive consumer decisions in urban areas if its not based on network coverage? How can carriers differentiate their coverage in the city? These are a small sampling of the types of questions our data can help explore.